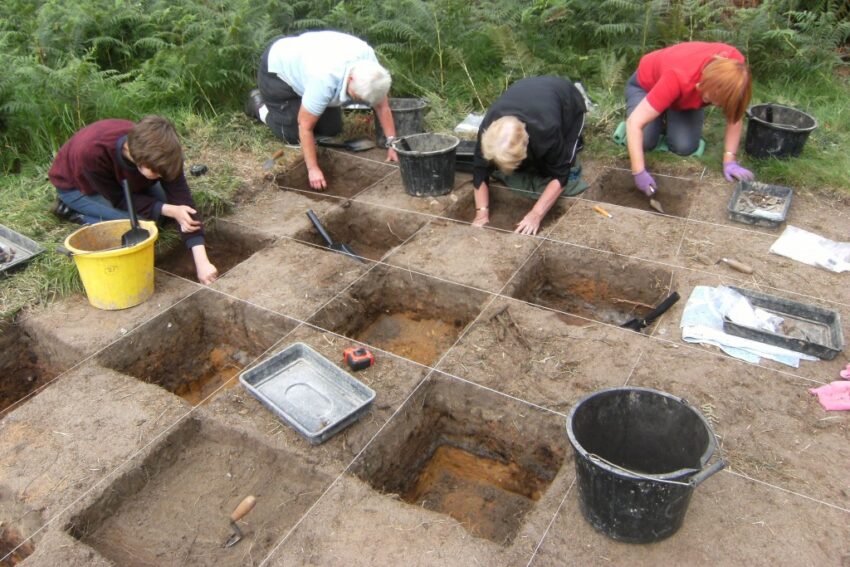 One of the finds: fragments of a Bronze Age dagger

In the last three weeks of September, the long expected first excavation in a four year project to uncover the history of Petersfield’s Bronze Age barrow cemetery went ahead. Each day 18 enthusiastic volunteers worked alongside project leaders George Anelay and Dr Stuart Needham to find out more about three sites.

They hit the jackpot with finds that included ephemeral traces of a wooden box or ‘coffin’ in barrow 11. Inside were a number of important grave goods: nine worked flints overlaid with two blocks of iron-impregnated sandstone. The excavations also brought to the fore three fragments of a bronze dagger and a perforated whetstone, together with a flint fabricator, further to the west. Old aerial photographs and the geophysical survey done in June had identified an enclosure (site 24), just north of that barrow, that was also subject to investigation. The site is difficult to date, but luckily several wood fragments found there will allow carbon dating. Site 23, to the west of the Heath nursery, yielded a very bountiful assemblage of Mesolithic flint work of varied types, probably dating to the middle of the Mesolithic, c 6,000 BC, confirming that this was a flint-knapping site.

Over a two week period, 195 children from six local schools visited the excavations and took part in specially designed workshops that allows them to learn more about Petersfield’s prehistory and become archaeologists for the day. Sessions were designed and led by the museum’s Education Officer and supported by George Anelay and numerous volunteers.