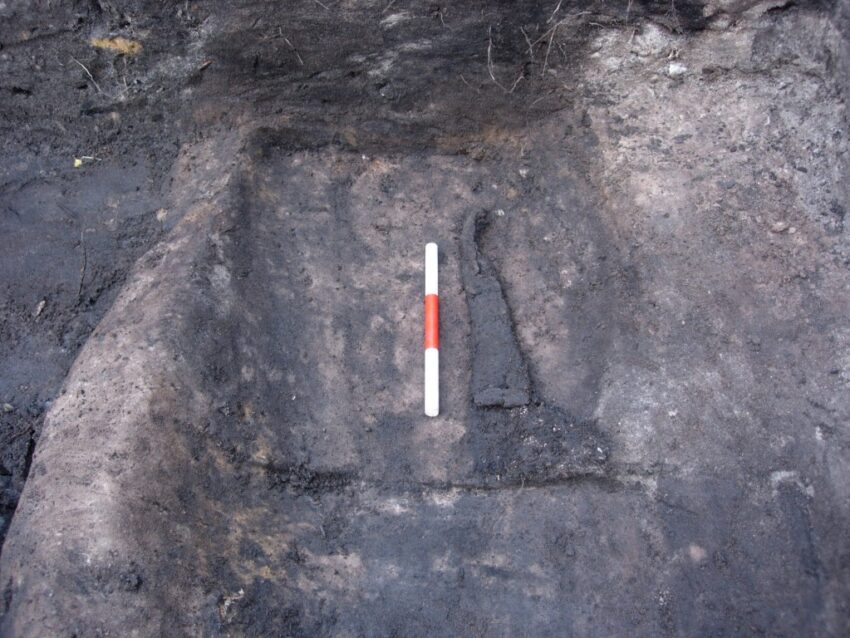 At the very end of the three week excavation in September 2015 the archaeologists and their team of volunteers discovered an intact grave. In addition to at least fifteen artefacts of flint and stone alongside a confined spread of cremated bone fragments, the team uncovered a mystery object represented by hardened sand, almost certainly caused by the mineral-replacement of originally organic items. It is 38.5cm long and due to its shape and positioning in the grave it is believed to be the wooden ‘handle’ of a bag that contained the bones.

While it is not the first time that it has been possible to deduce that an Early Bronze Age cremation was deposited in an organic bag, hitherto there has been no evidence for such bags having what appears on the Petersfield Heath evidence to be a rather elaborate wooden ‘handle’. It suggests a degree of ceremony was involved in the carriage of the individual’s remains to the burial site and may imply that the act of cremation took place elsewhere or at an earlier time.

The concentration of barrows on Petersfield Heath is noteworthy, and this new evidence may give further support to the idea that the site was regarded as an especially sacred place which was highly favoured by the elite of a wider region.

A detailed report is published under ‘Project documentation’.