We are very excited to announce the acquisition of a Bronze Age hoard to the Museum, currently on display in the People of the Heath: Bronze Age Barrows in Petersfield exhibition, which runs until 24th November 2018.

The Buriton Hoard consists of four attractive bronze ornaments: two torcs (worn around the neck) and two bracelets. The hoard was found by a metal-detectorist in 2016 in Buriton parish, not far from Petersfield Heath.

These types of ornament – twisted bar torcs and geometrically incised armlets – date to the Taunton phase of the Middle Bronze Age (c.1400 – 1250 BC), when barrows were no longer being built. The styles were inspired by similar ornaments in continental Europe. While such finery is found in women’s graves in parts of Europe, in Britain the practice of putting fine grave goods with the dead had ceased. Highly crafted objects were instead buried in hoards, thought to be offerings to the gods.

These pieces are likely to have been made by bronze-workers in or close to this region. Similar examples have come from other sites in West Sussex and East Hampshire. The significance of the pairing of the torcs and armlets is unknown, but armlets are known in pairs from both Liss and Harting nearby.

The hoard was declared to be Treasure under the 2002 extension to the 1996 Treasure Act and was acquired for Petersfield Museum with a generous donation from an anonymous benefactor. 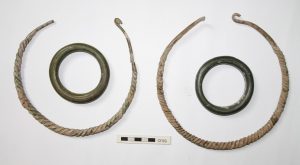