Our main stop today is Barrow 4, next to the cricket pitch.

The enigmatic Barrow 4 with two barrows.

We can see from the photos below that Barrow 4 has an interesting construction. When it was built, the bank was defined with two rings of turf around the whole barrow, which was then filled in (see the yellow clay) to make the bank. The dark layer of soil on the bottom is the buried Bronze Age land surface – this will be sampled for pollen to see what plant life was there when the barrow was built.

It is not often we get the chance to understand how these barrows were constructed, so these rings are an interesting find. 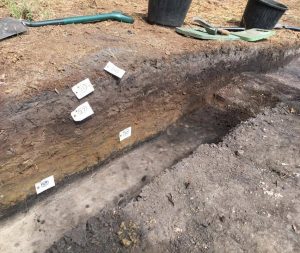 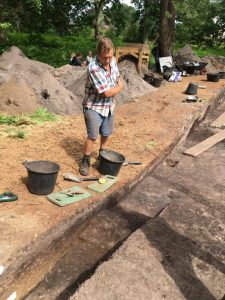 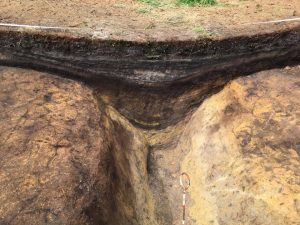 The majority of the main mound on Barrow 4 has been removed now, and the turves and animal burrows can be seen across the surface. Two or three pits are still being investigated, including this one which seems to be an empty pit lined with charcoal. There are no finds as yet, but we know it is old as it was sealed under the outer mound. It is reminiscent of a pit found in Barrow 14 the last time it was excavated; lots of charcoal but nothing else. Perhaps this indicates a ritual fire burning? 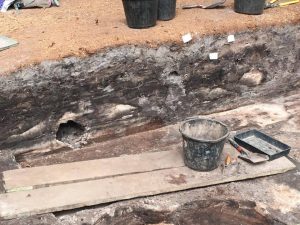 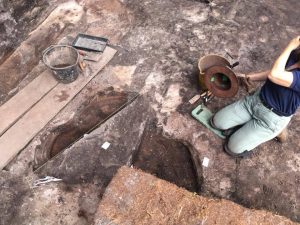 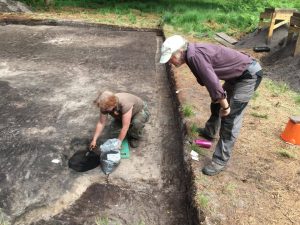 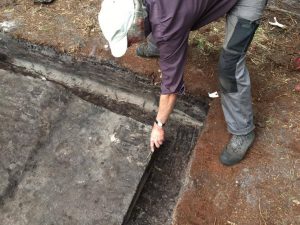 Here Stuart points out a later pit cutting through the turf mound in the middle of the barrow. At the moment there is no way of dating this, but it could be relatively recent.

Finally, one last peek at Barrow 1, which continues to surprise with its scale. Our team have still not reached the bottom of the ditch, but it is looking to be at least 4.5m deep. The turf stack in the middle also comes out a long way, meaning the barrow had a very big diameter before the turves were put on top.

Volunteers are just cleaning up the trench ready for photos and it will be filled in next week – and a good thing too, we don’t want anyone falling in it! Standing on the edge of the ditch I nearly got vertigo! 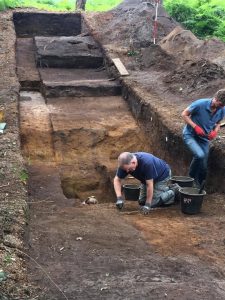 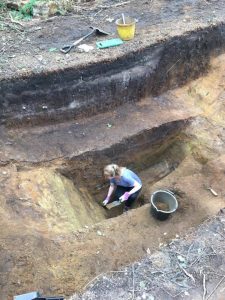 Next week we continue to work on Barrow 14, 19 and the Mesolithic floor – and don’t forget from Tuesday to Saturday next week you can still join one of George’s free tours of the site.

See you next week!